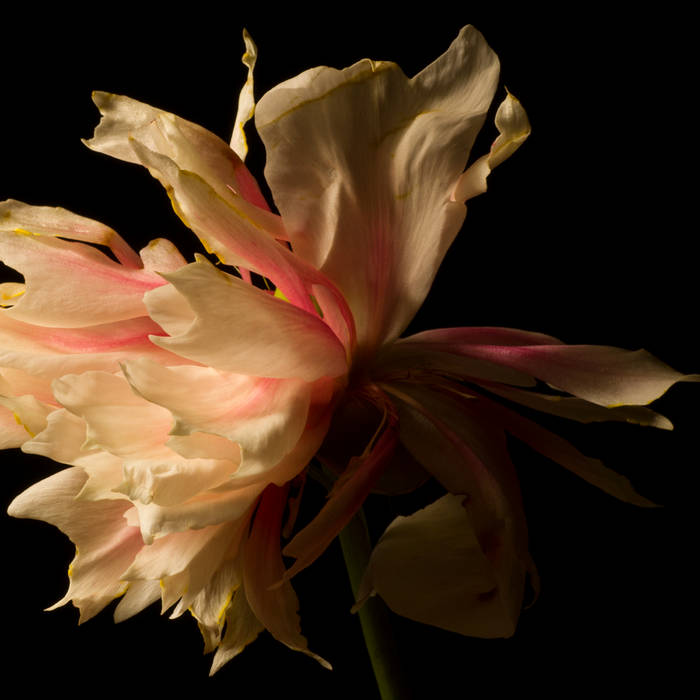 William Suran’s eponymous release is his second solo offering and the first with Love All Day. Suran (whose primary practice is as a visual artist) studied painting at the Kansas City Art Institute and now resides in Brooklyn where he makes extremely labor intensive and exquisitely rendered old-master level water color paintings of flowers, some of which have taken up to seven years to complete. Along with his painting materials, Suran keeps eight vintage tape echo machines and a guitar in his Brooklyn studio, which he initially spent time tinkering and improvising with as a way to decompress after long days of highly concentrated painting. What began as a sideline to his main work soon turned into a project in its own right, and for the past eight years he has been making ambient works nearly every day with a regular regiment of recording from nine pm to midnight. This edition focuses on work created from 2011-12, when Suran first began to photograph and paint thousands of images of his beloved peonies. The music parallels this work, as daisy-chained tape machines cycle endlessly, altering phrases with each presentation so that new forms become distinct over time. While Suran has said his work and approach to music is most influenced by Steve Reich, we also hear traces of baroque and early music in these recordings, as the guitar almost seems to be alchemically transfigured into a reed organ, a cello or a woodwind instrument, at times evoking nothing less than the tone color and otherworldliness of Heinrich Ignaz Franz Biber’s wondrous Mystery Sonatas.

Bandcamp Daily  your guide to the world of Bandcamp

MF DOOM is given his flowers, plus appearances from MC Jada Imani and Stanley Ipkuss